The gallery week-end has become a rite of passage for every city with a vibrant contemporary cultural scene. Every capital has its own gallery week-end enticing collectors as well as art lovers. From Beijing to Amsterdam, to Seoul and Mexico City, the gallery weekend is an opportunity to satiate your thirst for art. This past two days, Paris celebrated its own with activities all over the city. Partnering with museums like the Centre Pompidou or la Monnaie de Paris, and adding to its already extensive list galleries such as Perrotin and Magnin-A, this year’s edition consolidates the event’s reputation while exploring new territories. Here a summary of some of the galleries I visited.

Abdelkader Benchamma and Kehinde Wiley at the Galerie Templon

Engramme, title of the exhibition by French artist Abdelkader Benchamma, referred to the hypothetical means responsible of storing our memory. It is not clear whether this is a substance or if the engram even exists, nonetheless it is considered to some as memory’s imprint. Benchamma’s work is thus an interpretation of an imaginary cartography containing our fondest and more dreadful memories. As always in Benchamma’s work, there’s no such a thing as a frame as he paints in walls breaking the space constraint, building fluid rooms where the canvas is only a starting point. What really differs from his previous oeuvre is the addition of colour; influenced by coloured marbles in Rome – where he lived for his residency at the Villa Médicis – he transferred the mineral’s structure into his dynamic drawings. Inspired also by the Book of Miracles, an ancient book illustrating “supernatural” phenomenons, the exhibition pondered on religion and science’s role in our time. Mind and matter blended together dismantling the permanent opposition between the two forces. 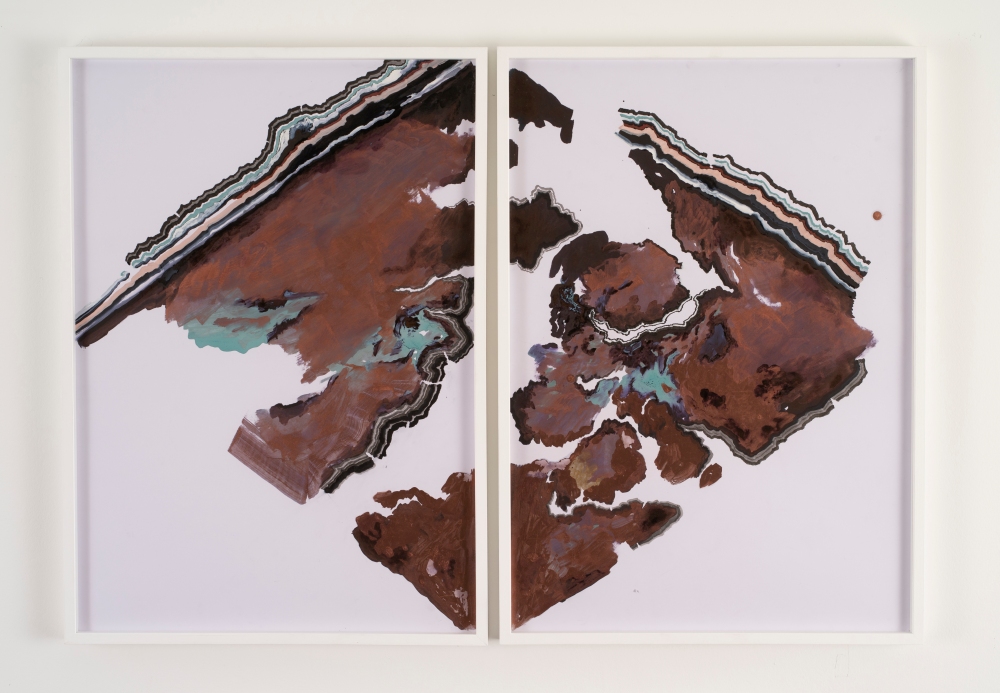 On the other hand, Kehinde Wiley’s show focuses on the Mahu’s, a small community in Tahiti considered to be neither male or female but a third gender. Before the colon’s arrival the mahus were well integrated and accepted in the island’s territory. Nevertheless after the colon’s arrival, they started to be chased and frowned upon for their behaviour didn’t match with Western standards. Portraits of mahus flood the walls of Templon gallery with their fierce attitude and their gorgeous attire. Empowering is the word, not commanded by renowned politicians or rich industrialists, but made for vulnerable minorities and celebrating nonconformist beauty standards. The portraits do not follow art history’s mainstream narrative either, they actually dispute it by putting in the public eye long silenced individuals. In the basement, the gallery screens a video retracing the steps of each model, their struggle and their experiences. Aside from the interviews, the video shows beautiful images of the island’s ecosystem. However, we later learn that this so called natural environment was actually made by the colons, hence questioning the notion of “natural” and putting under scrutiny the legitimacy of binary constructions.

Cathryn Boch at the Galerie Papillon

Cartography, in the 15th century, was tantamount to propaganda or contemporary publicity in modern times. Those possessing the tools to define space held – and still hold – the power to model our perception of reality. It comes as a surprise then that often imagined, arbitrary lines can and do so much harm to entire populations, to human lives. The migrant crisis in the Mediterranean, the humanitarian crisis between the Mexican and American border, the war between Israel and Palestine, and so many other conflicts that are less covered by the media; all share in common the fracture of territories to the profit of imagined borders. Cathryn Boch’s exhibition Reverse at the galerie Papillon interrogates the absurdity of the frontier by creating her own maps with recovered materials, the plans she fabricates are patchworks interweaving together arbitrary realities, her personal ones. All are handmade and may seem sometimes unfinished which demystifies maps’ authoritative essence while giving to them a more intimate trait. Moreover, Boch’s maps are physical reminders of France’s colonial past and colonisation impact in Northern Africa mostly, their desuete appearance turns these fascinating objects into relics constructing thus an archeology of the present. The inevitable question arises: are lines more valuable than human life?

Overpowering loneliness. This could be an alternative title to the exhibition Vois-là by Franco-Algerian painter Djamel Tatah at the galerie Jerome Poggi. Portraits of ghost-like characters hang over the walls of the gallery. An eerie feeling of been scrutinized arouses from some of the canvases setting up an uncomfortable atmosphere in the room. Their melancholic faces heighten the impossibility of communicating and establishing any connection with them. Regardless of their spectral aspect and sulky gaze, we can relate to every single painting as they embody feelings such as loneliness or complete boredom, both persisting in our lives framework. Each canvas is a hermetically sealed realm, a “huis clos” were the characters are prisoners of themselves. Devoid of any landmarks we are directly confronted to pure colours – recalling Rothko’s big surfaces – and confined shapes manifesting the shallowness of our world. The linear lines convey total silence and despair as well as the two dimensional pictorial space where images are plain flimsy impressions. Plato’s allegory of the cave surges as a possible dimension for we feel inexorably drawn to this characters – the canvases format here plays a vital role – but rebuked by this kafkaesque universe. 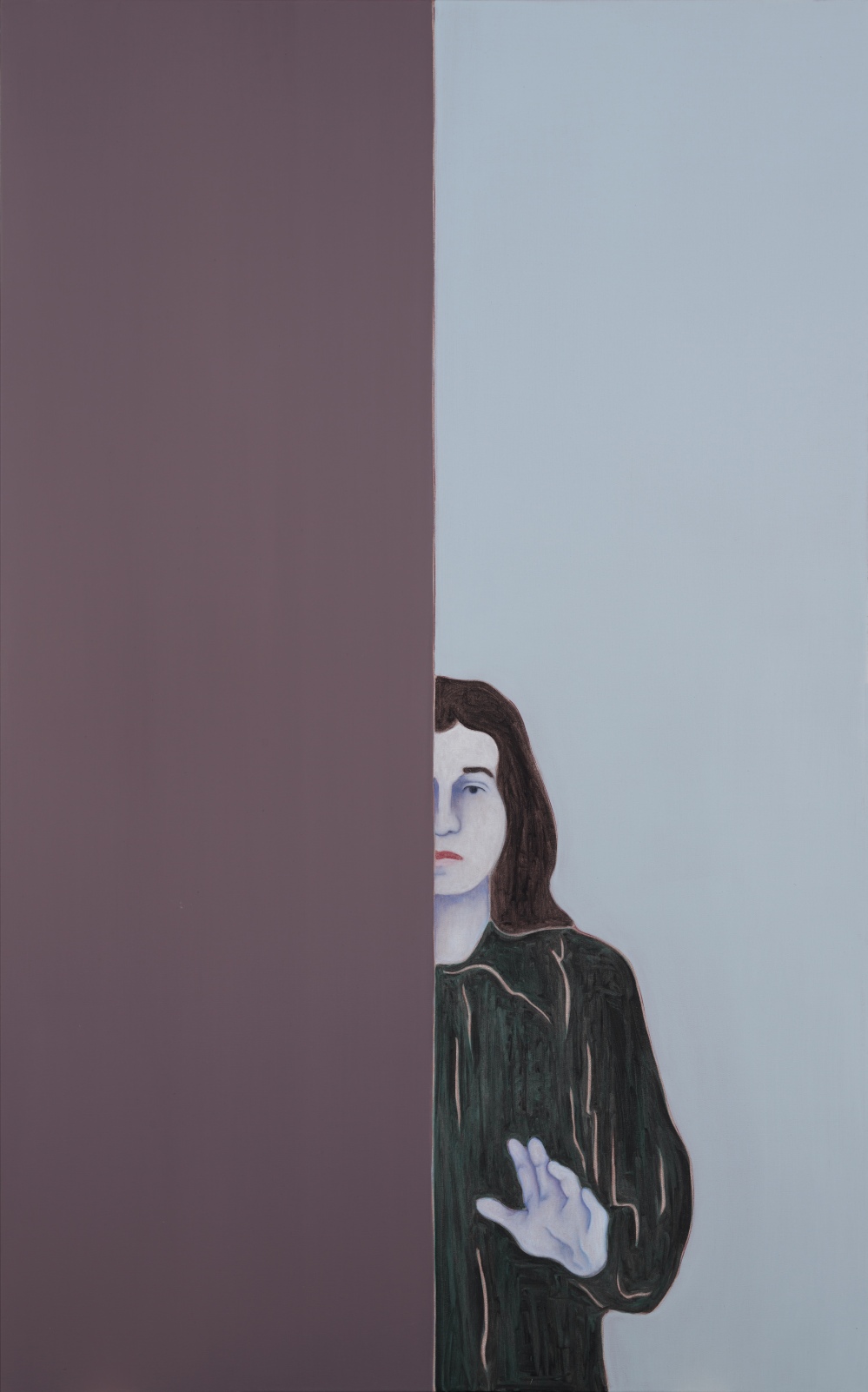 Katinka Bock’s exhibition T-toxic at the gallery Jocelyn Wolff hangs by a very thin thread. As we enter the space, we see the disposition of the objects and we become aware of our bodies, balance is key so that everything holds together. Still exploring ceramics and the material’s limitations, she creates sculptures with torn forms challenging not our perception but gravity itself! Her long infatuation with ceramics seems to have come to an end, as she includes wood sculptures with the form of a spoon. Meret Oppenheim work Object (Le déjeuner en fourrure) is evoked and with it, women’s position in art. However, the exhibition’s title seems to lead us to another path, an arena where contamination and waste are conducting us toward extinction. It’s not much of an statement, rather a feeble echo of an urgency that it’s all too present and overwhelming. Although the toxicity is palpable in the aggressive lighting, some elements such as the curtains alter our judgment.

The show is a labyrinthine journey in which the artworks are hints of a intricate puzzle that need to be interpreted in order to make sense. There are some nice surprises hidden in between the walls, it’s up to the viewer to see beyond to discover what is beneath the surface.