Hidden in a quiet street at the Marais – one of the most concurred neighborhoods in Paris – is located a small artist run space called Rinomina, a location honouring the term “artist run space”. The first time that I visited the space was during the vernissage of the exhibition “Courage! Near Infra Red”. I didn’t know what to expect with little to no information about the artists exhibited, but I was mystified by the title right away. 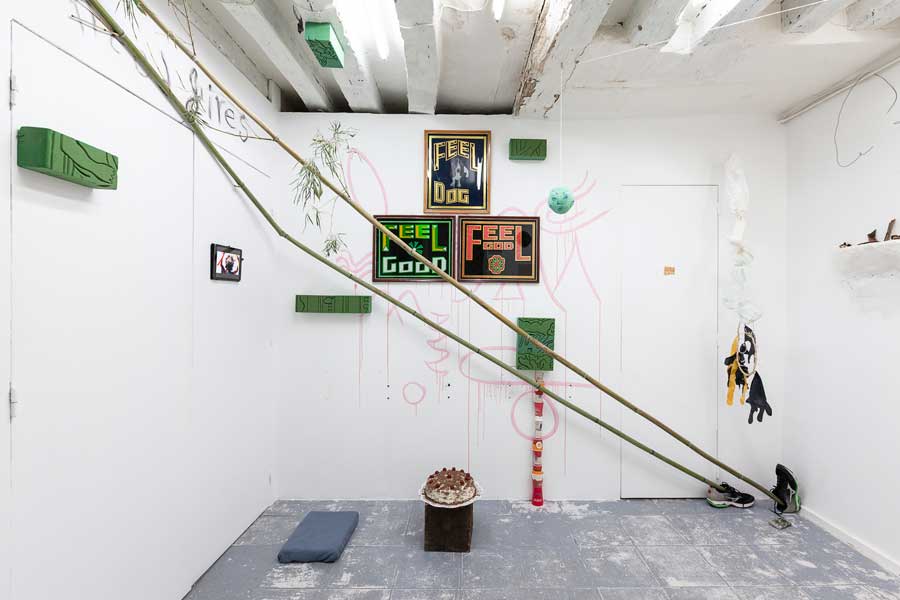 An artist run space, as the name suggests it, is operated by artists, unlike galleries or museums there is no mediator between artists and spectators, thus the space is ruled solely by creators eager to have a personal connection with their spectatorship. This credo is partaken by the two artists running Rinomina, Daniela Baldelli and Markus Lichti. “It’s such a pity, art is nowadays also succumbing to the market when it should be a completely free space. It continues to be but less than before and it’s up to us to keep it that way”, stated Markus during our conversation. 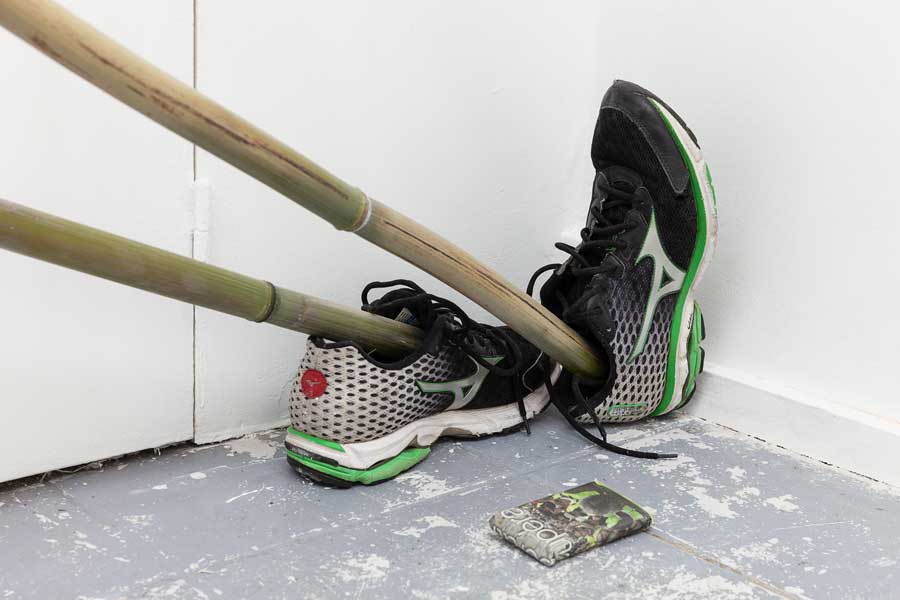 Hugo Montoya, If I were in your shoes, I think I’d write to her rather than try to explain over the phone, 2018, found sneakers, bamboo

Sure everybody needs to live and pay the bills, galleries are not the enemy but artists need more spaces to nourish their praxis as well as to test new things. Rinomina is like a laboratory in which creators are challenged and encouraged to try new things even if at the end what they do doesn’t convince them. As Daniela and Markus are both creators, they know how to stimulate their peers for they understand how the creative process works. Time is not as a source of stress but just another component of life, time is not capital is just planely time. Therefore, Rinomina’s pace is irregular, it comes and goes like a wave but each time it’s open you can feel the level of engagement and the passion that drives this project.

This is perhaps the reason why artists such as Abraham Cruzvillegas enjoy participating in exhibitions in Rinomina: the energy and sense of community felt in the place is so electrifying that once you go you’ll probably want to go again. Human relations and dialogue seem to be the key to the success of this shrine for artists and believers in art. “To me art exists when the spectator and the artwork meet. It’s not the object per se that counts, is this ephemeral moment of meeting between two entities”. According to Markus and Daniela, art is a constant dialogue inviting to rethink our relation to the world.

Their latest exhibition, Courage! Near Infra Red was an initiative to make handmade artworks with no money, that could be made under instructions. Everything was sent to Markus, Daniela and Abraham who interpreted the instructions and built what they were told, although they didn’t always followed the steps religiously. Authorship was questioned, when the concept belongs to someone but the work is made by another person, who is the author? It’s again the meeting point that captivates our attention. 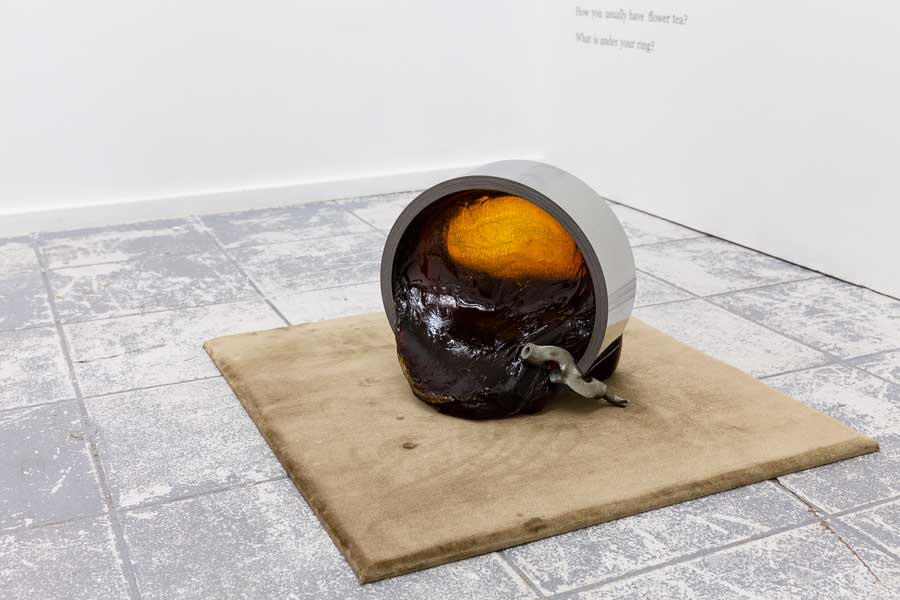 Regarding the exhibition’s title, it’s again a question rather than an answer. Courage! Near Infra Red was a free interpretation of the name of the space, Rinomina. What Abraham Cruzvillegas was seeking was to distort the word Rinomina – which derives from the verb “rinominare” in Italian meaning rename – and by doing so to deconstruct language, to play with it. Deconstruction is repeatedly seeked for instance Cristóbal Gracia work Aquitania Part I, investigates the concept of exotism and colonialism while deconstructing the myth of Acapulco. After decades of being the United States favorite spot for vacationing, Acapulco has become a cartel’s playground. Is there a connection between the city’s golden years and it’s fall? It’s difficult to say but Gracia sees his video as a metaphor of the United States numerous political interventions in Latin America. Furthermore, Noémie Vulpian’s work interrogates not a concept but the medium itself, her work Softening Point combines hard materials like steel with soft ones like bitume, and as she plays with this two antithetical notions she demonstrates that an artwork – like matter – can mutate and be vulnerable. Other artists like Victoire Barbot paid homage to art – she reinterpreted Rodin’s The Gates of Hell – with green soft sponge while Celeste Caballo presented burned objects making allusion to the fire of the National Museum in Rio de Janeiro and the Mackintosh building in Glasgow. Artists from around the world sent their propositions and instructions to be interpreted by Abraham, Daniela and Markus, and although the exhibition is over the energy and comradeship remains.

There’s no place like Rinomina or at least I haven’t found it yet, as private foundations reproduce at a fast rate, this space fills a void for artbufs and artists alike. Again, there’s nothing wrong with museums, galleries or foundations, experiences and human contact are easier to have when in a human scale space, that’s we thrive for!